Interview of Grace Robson in NYC, by Alice Moraz 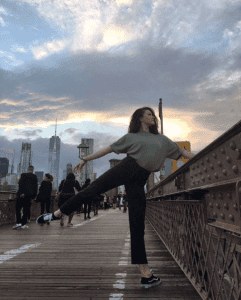 A few weeks ago, I got the opportunity to observe classes at the American Ballet JKO School in New York City. When I arrived at 890 Broadway, I was welcomed by JKO School Director Rebecca Schwartz who walked me to the studio. The perks of having the school located in the same building as the company is that whenever you are walking along the halls you can get a sneak peak into ABT Company and Studio Company reahearsals or you might even run into a world class artist.

I originally came to observe Thomas Brun (the candidate I was a translator for at the 44th Prix de Lausanne in 2016 but he injured his knee and had to go back to France to get surgery) and Grace Robson. So here I am in a studio filled with quite a few girls – wearing the required blue leotard – and five boys. Needless to say, they will have a lot of lifting to do in the following partnering class.

Afterwards, I met the Australian Malaysian 17 year old ballerina, Grace Robson, over brunch and she answered a few questions about her ballet education as well as about Prix de Lausanne and the opportunities it gave her.

Hi Grace, could you introduce yourself?

I grew up in Australia and studied at the National College of Dance (formally Marie Walton Mahon Dance Academy) in Newcastle, Australia. When I was ten I moved to The Hague in the Netherlands and studied for 5 years at the Royal Conservatoire (they had a dual program which allowed me to do dance and study in the same building and complete my high school diploma as well). Then I went to compete at Prix de Lausanne in February of 2016 and I got offered a full scholarship to study at the ABT JKO School in New York City. I have now almost come to the end of my first year. It has been an amazing year, very different but allowing me to learn so much dance wise but also as a person in NYC, growing up and being on my own.

It has been a little bit more than a year after Prix de Lausanne, what is your best memory about the week? 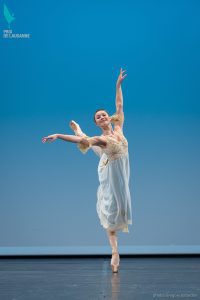 Had you done other ballet competitions before?

No, Prix de Lausanne was my first competition.

Why did you choose ABT JKO School?

I wasn’t offered different scholarships but ABT was the first choice I wrote down (on the application you get to fill out what your top choices were and I had put ABT JKO as my top).

Could you tell me a bit about your weekly schedule? 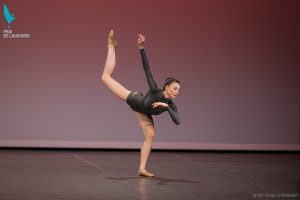 We start at 1:30 pm but we usually all get there around 12:30 pm to warm-up properly. We start later in the day because a lot of people are still in their academic schooling so they need time to complete that. We always begin with a one and a half hour or two-hour ballet class and our normal teachers are Ethan Stiefel and Cynthia Harvey. Then we either have pointe work (three times a week), partnering (twice a week), character (once a week), modern (once a week) or Pilates (once a week). We are exposed to many different styles because we have French teachers and American teachers who all have different backgrounds of trainings.

What is it like to dance and live in NYC?

It would take me every day that I’ve been here to explain everything that happens in a day just because it is crazy, but the one think I can say is that it is really inspiring to be around artists all the time.

Grace is finishing her first year at the end of June 2017. She will move up to Upper 2 at ABT JKO School for one more year before auditioning for companies or studio companies.