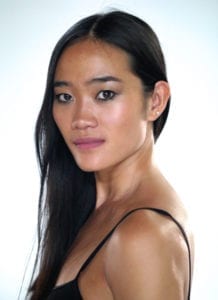 “Prix de Lausanne represents a lifetime opportunity to me.  At 18, I was unclear about the direction I had to take between pursuing a professional dance career or in academic study.  I felt uncertain towards my dance skills and where my dance level would be placed among many young dancers from around the globe.  The competition has given me a chance to become a professional dancer and join my dream company.  I can hardly believe how one competition could offer an opportunity that changed and impacted my life path so much.”

Born in Thailand, Sarawanee Tanatanit joined the Rhythmic Gymnastic National team of Thailand at the age of 13, who became gold medalists in Junior Championship and South East Asian Game competition.  She was offered a scholarship from Sports Authority of Thailand to continue her rhythmic gymnastic training in Vancouver, Canada, where she also pursued her dance career after.  Prize Winner of the 2001 Prix de Lausanne, miss Tanatanit was offered an apprenticeship at the American Ballet Theatre Studio Company.  The following year, she was accepted into the main ABT Company where she spent 7 years.  She was named “Critic Choice” by Pointe Magazine in 2003 and awarded one of Dance Magazine’s “Top 25 to Watch” in 2008.

She moved to Europe in 2008 and danced leading roles for Ballet du Grand Théâtre de Genève such as Giselle (choreographed by Pontus Lidberg), Romeo and Juliet, Tristan and Isolde (choreographed by Joelle Bouvier), which received “le Grand Prix 2016 de la critique” for best show of the season; leading roles in the Nutcracker, Amoveo and Spectre de la Rose by Benjamin Millepied.

Currently, she is a guest Artist with the Danish Dance Theatre as well as a guest Teacher and Coach with qualification from ABT’s National Training Curriculum for schools in Europe and South East Asia.  In 2019, she launched her own project called “HOSTBKK” in Bangkok, a Cultural Art Center supporting higher dance education and bringing varieties of art forms into project collaborations and performances.