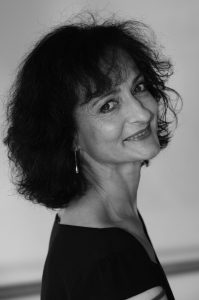 “Every time that I participate, it gives me energy. It is nourishing as well as regenerating to work with young people. I have an amazing job! I am always excited to discover new talents, and I love trying to guess where the dancer comes from.”

Member of the Corps de Ballet of the Paris Opera since the age of 16, Monique Loudières was chosen by Rudolph Nureyev  in 1981, to interpret “Kitri” in his production of Don Quixote. Rosella Hightower, then Artistic Director , named her “Etoile” ballerina in 1982. Thereafter, she danced most of the classical and neoclassical repertory.  She had a predilection for  dramatic heroines from the following ballets: Giselle, Romeo and Juliet, Manon, Notre-Dame de Paris, Eugene Onegin.

In 1993, the Ministry of Culture awarded her the Grand Prix National de la Danse and named her Commander of Arts and Letters in 1996.

After benefiting from the teaching of great masters such as Y.Brieux, Y.Chauviré, P. Lacotte, V.Verdy and R. Nureyev, Monique Loudières stated that she wished to convey her experience to new generations of dancers. She became teacher and coach for the Prix de Lausanne, Europa Danse, Paris Opera Ballet and the National Dance Conservatory (Paris and Lyon).

In 2001, she was appointed Artistic Director of the Cannes Rosella Hightower Ballet School .

In 2003, she was invited to the Paris Opera for the tribute to Rudolf Nureyev, and in Tokyo with M.Legris . She was also invited to interpret duets with L.Hilaire and M.Legris for the Japanese public in 2004 and 2007.

In November 2007, she created her own version of the ballet Giselle with the Cannes Junior Ballet and Ballet of Nice and Avignon.