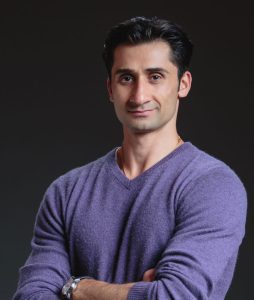 Prix de Lausanne is an international ballet competition representing young talented dancers. It is a fantastic opportunity for the young artists to be recognized and continue this beautiful and challenging art form in professional ballet companies. As an alumni from 1999 Prix de Lausanne has been always home for me. And I want to help mentor for the next generation.

Born in Yerevan, Armenia, Davit Karapetyan trained at the Armenian School of Ballet and Schweizerische Ballettberufsschule. After dancing with Zurich Ballet, he joined San Francisco Ballet as a principal dancer in 2005.

Davit has danced such major roles as Albrecht in Tomasson’s Giselle, Nutcracker Prince and King of the Snow in Tomasson’s Nutcracker, Romeo in Tomasson’s Romeo & Juliet, Prince Desiré in Tomasson’s The Sleeping Beauty, Prince Siegfried in Tomasson’s Swan Lake, Basilio in Tomasson/Posskhov’s Don Quixote, Onegin in Cranko’s Onegin, Sea Witch in Neumeier’s The Little Mermaid, and Prince Gillaume in Wheeldon’s Cinderella. He created principal roles in Tomasson’s Caprice, On a Theme of Paganini, and On Common Ground.

Davit performed Pas de Deux from Rubies and Mirror Pas de Deux from Onegin at the Taipei International Ballet Stars Gala in Taipei, Taiwan, in June 2016, and Pas de Deux from Giselle and White Swan Pas de Deux from Swan Lake at Festival des Arts de Saint-Sauveur in Saint-Sauveur-des-Monts, Quebec, Canada, in August 2015. He danced the role of Romeo in the 2015 film of Tomasson’s Romeo & Juliet as part of the inaugural season of Lincoln Center at the Movies: Great American Dance. He choreographed and produced 1915 Meran vor Aprink, a dance film about the Armenian genocide, included in the 2015 San Francisco Dance Film Festival. In 2014 he performed as a guest artist at the International Ballet Gala in Dortmund, Germany; other guestings include the Armenian Opera House, The Hamburg Ballet’s Nijinsky Gala, and Japan’s NBA Ballet. In December 2008 Davit was featured as the Nutcracker Prince in the PBS Great Performances broadcast of Tomasson’s Nutcracker, co-produced by San Francisco Ballet and KQED Public Television San Francisco, in association with Thirteen/WNET New York.

Davit’s 2015 film, Meran vor Aprink, won an Emmy Award from the National Academy of Television Arts and Sciences, San Francisco Northern California Chapter, in June 2016. He won Best Couple with Vanessa Zahorian in the senior division at the USA International Ballet Competition in Jackson, Mississippi, in 2006. He received gold and silver medals at the Armenian Ballet Competition in 1997 and 1998, respectively, and was a prizewinner at the Prix de Lausanne in 1999.