“One does not need to be a classical ballet connoisseur to see that all Vaganova Ballet Academy graduates, from core dancers to ballerinas, have similar performance manner: the same style, the same pattern of dance, which manifests itself in harmonious fluidity and expressiveness of the arms, in the responsive flexibility of the body combined with the reliable aplomb and stability of the core, in the noble and natural head position—these are all features of   “Vaganova schooling.”

On May 4th, 2015, Russia’s oldest ballet school, Vaganova Ballet Academy, will celebrate its 277th Anniversary.  As part of the anniversary renovations, a spacious rehearsal studio has been added to the academic facilities; the theater has been equipped with contemporary technical aids while preserving its original charm; the library has been renovated in a futuristic style that is nevertheless still in harmony with the gala portrait of Marius Petipa. 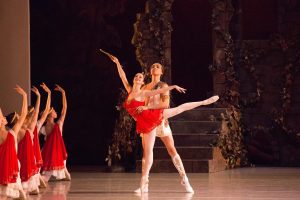 The Academy method of training was created by one of its most distinguished teachers, professor Agrippina Vaganova, who taught at the Academy from 1921 until her death in 1951. Agrippina Vaganova proceeded from experience of her predecessors who taught at the School: Jules Perrot, Marius Petipa, Lev Ivanov, Christian Johansson, Enrico Cecchetti, Mikhail Fokine, Nikolai Legat and many others.

Professor Agrippina Vaganova codified ballet training syllabus and today the Academy which bears her name continues to develop and advance the Method that has created so many exceptional artists.

Each June Vaganova Academy graduates join the leading ballet companies, and each September a new group of children begin their ballet education at the Academy. The tradition continues.

Visit Vaganova Ballet Academy for more information about the Academy and its programs.