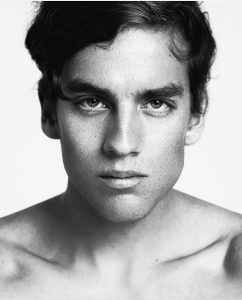 “The Prix de Lausanne means the beginning of my career as an artist and being back as a judge means a huge responsibility – to have someone’s future in my hands. I look forward to seeing the generation who is responsible for keeping our art form alive.”

In 2009, he joined the Houston Ballet and then in 2010 the San Francisco Ballet. During his career, Sebastián Vinet has had the privilege of working and dancing principal roles in pieces of world known choreographers such as Marcia Haydée, Kenneth Macmillan, William Forsythe, Christopher Wheeldon, Helgi Tomasson, Stanton Welch, Mark Morris, Ben Stevenson, Demis Volpi, Val Caniparoli, John Cranko, to name a few. He has been invited to dance  in several international ballet galas and teach masterclasses in England, Denmark, China, Dominican Republic, Indonesia, Russia, Mexico, Argentina, Brazil, Ethiopia, Colombia, Japan, Australia, several cities in the United States, Hungary, Canada, Paraguay, Peru, Chile and Switzerland where he was one of the winners and apprenticeship recipient at the Prix de Lausanne 2009.

Another of his awards is the “Premio Jovenes Líderes del diario El Mercurio” 2009, award to the Chilean artists, presented by the ambassador of Chile in the United States. One of the most special invitation he has received was back in 2009 to appear as a special guest dancer at the 2009 Grammy Awards. Sebastian holds a parallel career as model, appearing in campaigns for brands like Armani, Burberry, Newman and Dolce & Gabbana, also being featured in magazines such as Vogue. In 2017, Sebastián Vinet was the artistic director of the first international ballet gala to be presented at the emblematic theater in Chile, Teatro Oriente and founded his own non profit foundation to help develop ballet in his country. In 2018, he was mentioned in Dance Australia as one of the best performances of the night during the premiere of FORTE in Melbourne, Australia. Sebastián Vinet’s biggest artistic challenge and honor this year will be to direct artistically the 20th anniversary gala of Vogue in Mexico City, an event that is being considered to be the next Met Gala of Latin America.