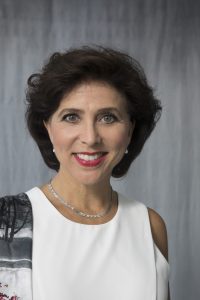 The Prix de Lausanne is a unique experience for everyone involved and for me it is an honour to participate. To follow young dancers during a week and having the chance to see them in various situations such as class, coaching as well as on stage gives both the competitors and judges a better chance to make fair decisions, at least as fair as it can get when you compete within the field of art.

It is a tough week for everyone involved but the experience to work with the other members of the jury in combination with the treat to watch some of the next generation ballet stars in the very beginning of their career is precious.

Madeleine Onne is since August 2018 the Artistic Director of the Finnish National Ballet.

In 1995, Madeleine Onne received the title of Dancer of the Royal Swedish Court by His Majesty the King of Sweden Carl XVI Gustav. She has also been awarded the Swedish royal medal Litteris et Artibus as well as The Royal Swedish Opera’s Gold Medal of Honour in recognition of her work as a Principal Dancer and Artistic Director for the Royal Swedish Ballet.

In 1996, she founded the group Stockholm 59° North – Soloists of the Royal Swedish Ballet which she managed until 2002.