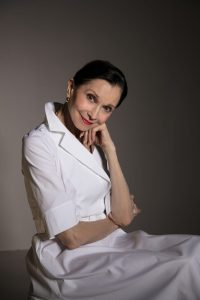 I have a great admiration for how the Prix de Lausanne has been maintaining what its founders – Philippe and Elvira Braunschweig – have initiated. This ballet competition is one of the most important and prestigious in Europe. Here in Lausanne, the young dancers have the opportunity to demonstrate their qualities, to interact and meet with their peers. It is a precious experience.

After having accepted the invitation of Philippe Braunschweig a few years ago, I’m particulary pleased and honoured to be one more time part of the jury panel.

Director of Academy of Dance, Mannheim

A German ballerina of international standing – the first since Fanny Elßler”, that’s how Clive Barnes, critic of the New York Times, described her and he added: “Germany has had to wait a long time for her.” Birgit Keil was educated and trained in Stuttgart and at the Royal Ballet School London. In 1961, she became a member of the Stuttgart Ballet under the direction of John Cranko and shortly after, she was promoted as principal dancer. By touring with the Stuttgart Ballett and solo appearances at the Opéra Paris, La Scala Milan, the American Ballet Theatre New York, the Royal Ballet London and Wiener Staatsoper alongside Rudolf Nureyev, she became known worldwide as ‘The German Ballerina’. She danced all leading roles in the classical and modern repertoires. Her interpretations inspired choreographers including Cranko, MacMillan, Wright, Tetley, Kylián, Neumeier, Spoerli, Scholz, Feld, van Manen and Haydée to create works especially for her. In 1980, she was awarded the honorary title of “Kammertänzerin”. Birgit Keil ended her stage career in autumn 1995 and announced the establishment of her dance foundation. In 1997 she took over the directorship of the Akademie des Tanzes Mannheim, where she also teaches as a professor. Since 2003/04, she became the director of the STAATSTBALLETT KARLSRUHE. Birgit Keil received several awards including the Medal for Merit of the Land Baden-Württemberg, Emmy Award, Federal Cross of Merit First Class, Deutscher Tanzpreis and Landeslehrpreis 2015 Baden-Württemberg. November 2017 she was honoured with the PRIX HÉLÈNE for advancement of culture by the Peter-Linder-Foundation.