Philippe Braunschweig, a man with two passions: dance and watchmaking

Founder of the company Incabloc 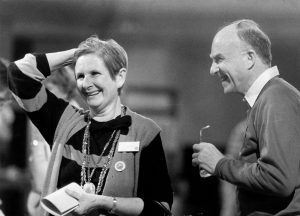 A love of watch movements has been passed down from father to son in the Braunschweig family from La Chaux-de-Fonds. Electrical engineer George Braunschweig (1892-1975) founded his company, Porte-Echappement Universel SA, in 1931 to focus on improving timekeeping reliability and especially the fragile spring-escapement pairing. His research led him to develop an anti-shock system to protect the spring-escapement in 1933: the Incabloc®. The Incabloc® is a vital tool that ensures watches work correctly and now features in most mechanical calibres.

25 years later, in 1958, George Braunschweig gave his company to his son, Philippe Braunschweig (1928-2010). He also graduated from ETH Zürich but he had one more passion: ballet. In 1972, during a lively conversation with his wife Elvire and the lead dancer and Professor Rosella Hightower (1920-2008), the trio founded a competition for young dancers in 1973: the Prix de Lausanne.

The annual Prix de Lausanne is held in February and has had unique world fame since it began. It’s even been named the “best ballet competition in the world”. Countless figures from the world of dance flock to it and it gives talented young dancers the chance of a study grant or apprenticeship to get their career off to a flying start.

Since 2017, the Prix de Lausanne was sponsored by the Genevan brand Émile Chouriet whose two passions – dance and watchmaking – reflect those of Philippe Braunschweig. Two sectors with but one goal: to master beauty.

Just like the Prix de Lausanne, Émile Chouriet has a very open policy in terms of transmitting knowledge, with apprenticeships providing young talents in the workshops with the tools they will need for the future.

Émile Chouriet is proud to continue its support for the Prix de Lausanne and the promise of a bright future it provides for the aspiring participants. The Finals will take place on February Saturday 8th, at the Auditorium Stravinski in Montreux, where Émile Chouriet will offer a scholarship to his/her Prize Winner.