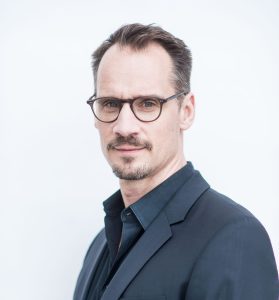 About his participation as jury member in 2017

For me the Prix de Lausanne is the epitome of a tradition that honors and nurtures the art of ballet in a unique way by having given this important platform to aspiring young dancers for many decades.

I have always had a lot of respect for the thorough and careful selection and competition process. I am honored to contribute to the latter together with some highly esteemed colleagues.

What do you expect from the 2017 Prix de Lausanne / What are you looking forward to?

I expect some exhilarating discoveries of young talents! I look forward to the broad range of presentations and to intense discussions with my jury colleagues.

Christian Spuck was born in Marburg, Germany. He has been Artistic Director of Ballett Zurich since August 2012.

After his ballet training at the renowned John Cranko School in Stuttgart he embarked on his dance career with Jan Lauwers’s Needcompany and Anne Teresa de Keersmaeker’s Rosas ensemble. He joined Stuttgart Ballet in 1995 and was appointed their resident choreographer in 2001. Choreographies for Stuttgart Ballet include das siebte blau (2000), Lulu. Eine Monstretragödie (2003), Der Sandmann (2006) and Das Fräulein von S. (2012).

Christian Spuck has created works for several renowned ballet companies in Europe and the USA, Aterballetto, Hubbard Street Dance 2, Royal Ballet of Flanders, and Aalto Ballet. Leonce and Lena, created for the latter, is also part of the repertoires of Les Grands Ballets Canadiens, Stuttgart Ballet and Ballett Zurich. Woyzeck which he created in 2011 for Norwegian National Ballet has also been performed by Ballet Zurich since 2013. Creations for the Ballett Zürich include Romeo und Julia (2012), Sonett (2014) and Anna Karenina (2014), a coproduction with Norwegian National Ballet, also performed by Stanislavsky Ballet in Moscow in 2016. In December 2016 he will direct Giuseppe Verdi’s Messa da Requiem, a big co-production of Ballet Zurich and Opera Zurich. Christian Spuck has also directed a few operas, amongst them Hector Berlioz’ Faust at Deutsche Oper Berlin (2013) where he will return to direct Richard Wagner’s The Flying Dutchman in May 2017.