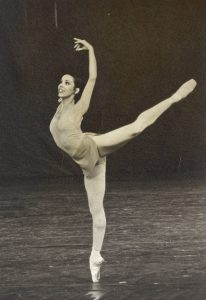 Sylviane Bayard began her ballet training in her hometown, Bergerac, at the Myrio and Desha School. She continued her dance studies at the Centre de Danse International de Rosella Hightower on scholarship. At the age of 15, she won a prize at the Prix de Lausanne.

She was chosen to be the leading actress in the movie “l’Age en Fleurs” and began her dance career with the Stuttgart Ballet at 16 where she became principal under the direction of Marcia Haydée. Her repertoire includes principal roles in classical ballets such as Swan Lake, Sleeping Beauty, Giselle, Nutcracker, La Sylphide, Don Quixote, Coppelia, La Fillle mal gardée, Carmen, as well as ballets from John Cranko (Onegin, La Mégère Apprivoisée, Romeo and Juliet, etc…)

Today she is an international guest teacher and coach. She will be a member of the 2015 Prix de Lausanne’s jury.

Along with Michel Gascard, Sylviane Bayard is the first prize winner of the Prix de Lausanne.

What is your best memory of the 1973 Prix de Lausanne?

As I stood on the stage after the finals  for  the prize awards, and I heard my name as the female prize winner.

What was your greatest fear during the 1973 Prix de Lausanne?

The switch between the “ Théâtre Municipal “ ( first days of the competition ) – flat stage- to the “ Beaulieu Theatre for the “ Finals day “ – raked stage!

It was not at the beginning of my career ( although I was only 18 years old ), with the Stuttgart Ballet. I was dancing the lead role in Peter Schaufuss ‘s production of La Sylphide. At the very beginning of the ballet, the Sylph has a solo while “ James” is asleep in his armchair. At one point she has a jumping manege around his chair, where the chimney is burning. The chimney was leaking oil on the stage, I slipped and fell.( fortunately, behind the high armchair ). I was so fast back on my feet , it looked as if I suddenly popped out of the armchair.

Regard the participation at the Prix de Lausanne as a wonderful experience to have the chance to win a scholarship for future studies. And listen to advice from various knowledged dance personalities.