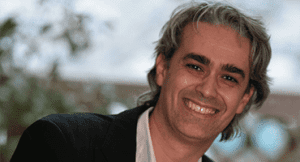 In 1981, Luca Masala studied at the School of La Scala in Milan, then in 1986 at the School of American Ballet in New York and finally in 1988 at the Princess Grace Academy of Classical Dance in Monaco.  At the age of 17, he joined the Royal Ballet of Flanders then headed by Robert Denvers, where he remained for three years. He performed roles in ballets by Balanchine, Béjart, Nureyev, Tudor, Violette Verdy, Flindt and others.  Then he worked for a year with Pierre Lacotte at the Ballet National de Nancy where he played key roles in Lacotte’s choreographies and choreographies of Antonio Gades, José Limón, Jirí Kylián, Ulysses Dove, Balanchine…  In 1992, he moved to the Wiesbaden Staatstheater in Germany under the direction of Ben van Cauwenbergh where he was involved in several works such as Romeo and Juliet, Swan Lake, The Nutcracker and many abstract pieces. He also worked with Peter Schaufuss on his Sylphide.  In 1995, he joined the Bavarian State Ballet in Munich under the direction of Konstanze Vernon as guest soloist dancer. A month later, he became a member of the company. His repertoire included choreography by Hans van Manen, Jirí Kylián, John Neumeier, William Forsythe, Mats Ek, Patrice Bart, Yuri Vamos… He took part in numerous creations and video recordings. He danced in prestigious theatres such as the Kirov, La Scala in Milan, the San Carlo in Naples and the Teatro Massimo in Palermo…  In 2000, he left the Bavarian company for Ballet du Capitole de Toulouse, under the direction of Nanette Glushak. There he performed most of the main roles of the classical and contemporary repertoire and was often invited to dance in foreign companies.  He began choreographing ballets such as: Sang mêlé, La lamentation du Christ, Les Sept Péchés capitaux and Nougaro.

At the end of his career, he became Maître de ballet for the Ballet du Capitole de Toulouse and assisted many choreographers, such as Nanette Glushak, Michel Rahn, Jacopo Godani, Mauricio Wainrot, Davide Bombana, Patrick Delcroix and Twyla Tharp.  He has been a guest teacher at the National Ballet of Canada, Stuttgart Ballet, Scottish Ballet, Ballet du Capitole and Vienna Ballet.  He created a group of ten dancers of the Ballet du Capitole (the Capitol Soloists) for whom he organized dancing evenings in Spain, Italy and France.  He was choreographer and assistant to the director Pet Halmen for the creation of the opera Faust at the Opéra National de Paris (2010).  In 2009, he was appointed Director of the Princess Grace Academy in Monaco.  He was awarded the “Giuliana Penzi” prize for his career and the “Premio Roma 2011 Jia Ruskaja“.  On 19 November 2011, he was appointed by HRH the Crown Prince to the rank of Knight of the Order of Cultural Merit.