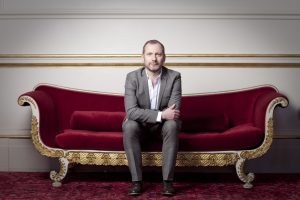 Kevin O'Hare
Director of the Royal Ballet
President of the Jury

About his participation as Prix de Lausanne 2017 President of the Jury:

“The Prix de Lausanne is a wonderful opportunity for me to see the talented dancers of tomorrow. I see it as more than a competition; it is a place where our young dancers are encouraged, cared for and given the feedback that provides the Foundation for their future careers.”

Kevin O’Hare was born in Yorkshire. Having started dancing at an early age, he trained at The Royal Ballet School from the age of 11 and, through an exchange programme, Royal Danish Ballet. On graduating he joined Sadler’s Wells Royal Ballet under the direction of Peter Wright and was promoted to Principal in 1990 at the same time as the company relocated to Birmingham, becoming Birmingham Royal Ballet. Performing across the UK and worldwide, he danced all the leading classical roles including Siegfried, Florimund, Albrecht and Romeo (in the first performance of Kenneth MacMillan’s new production of Romeo and Juliet for BRB), and created the role of Amynta in David Bintley’s full-length Sylvia. He also danced in major works by Ashton, Balanchine, Cranko, MacMillan, Van Manen, Tharp and Tudor. During his performing career he worked with Ashton, De Valois, MacMillan, Bintley and Wright, among others, as well as creating many roles. He has made guest appearances with companies all over the world, and produced many galas and choreographic evenings.

He retired from dancing in 2000 to work with the RSC, training in company management. He returned to BRB as Company Manager in 2001 and joined The Royal Ballet as Company Manager in 2004. He was appointed Administrative Director in 2009 and Director in July 2012. Since then, in addition to presenting the Company’s heritage repertory, he has demonstrated his commitment to new work by commissioning many one-act and five full-length ballets. He has also programmed a series of concert performances that, in addition to overseas tours, have presented the Company in places as widespread as Rio de Janeiro, Londonderry, Aldeburgh and Copenhagen. He is a governor of The Royal Ballet School and on the board of Northern Ballet. In July 2014 he was awarded an honorary doctorate from the University of Hull.