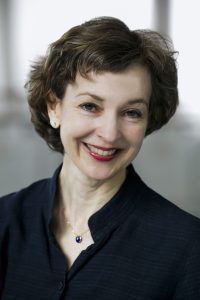 ❝ As a young dancer in 1980, the Prix de Lausanne opened my eyes to the international world of dance. I saw, admired, and could learn from incredible young dancers my age from around the globe. Bonds and friendships were formed that last to this day.

Presently, as a teacher and Deputy Director of the School of the Hamburg Ballet John Neumeier, I greatly respect and value the work of the Prix de Lausanne. The education of the young talents during their week of competition is of primary importance. The focus of continuing to foster these young dancers and providing the tools needed to fulfil their potential to pursue their chosen profession with a sound and comprehensive approach is fundamental. The opportunities offered by the Prix de Lausanne through the Partner Schools and Companies beyond the week of competition are often life-changing.

I am happy to support and aid the Prix de Lausanne in any way I can, as I believe in its focus and mission.❞

Gigi Hyatt received her training in Berlin, Germany with Tatiana Gsovsky and in Munich with Konstanze Vernon at the Heinz-Bosl-Stiftung. In 1980 she was a Finalist at the Prix de Lausanne. In 1982, Gigi Hyatt won the Gold in the Junior Division of The Jackson International Ballet Competition and in the same year joined The Hamburg Ballet John Neumeier. In 1984 she was honored with the Wilhelm Oberdorfer Award and in 1985 was named “Best Young Dancer” by Ballett International magazine. In her first season, Gigi Hyatt was promoted to demi-soloist and in 1986 became Principal dancer. Gigi Hyatt was fortunate to dance in many ballets choreographed by John Neumeier and created numerous roles such as Desdemona in Othello, Solveig in Peer Gynt, Viola in Vivaldi or What You Will and Cinderella.

In 1997, ending her career on stage, she moved to the USA, where she first became ballet mistress and teacher at The Georgia Ballet and School and in 2004 assumed the position of Artistic Director. Gigi Hyatt returned to Hamburg in 2013 to accept the position of Pedagogical Principal and Deputy Director of The School of The Hamburg Ballet.